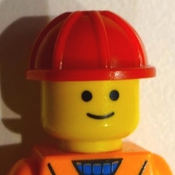 Engines power our world, Even deliver LEGO by large ships that use engines like this one. A 2-stroke marine diesel engine. This model represents an auxiliary engine used to power electricity on a freighter.

This model consists of a motor that moves the pistons, camshaft, connecting rods which move the valves. Also has a roots blower on the side. It's a supercharger, but much much bigger.  Other than the moving parts there is plenty of detail on this engine. You can see the fuel filters, stairs, opening doors to inspect the inside of the engine, injectors and fuel lines, air intake, and exhaust.

I have a video of the engine working. Even sounds just like a diesel engine!