This is a small scale semi truck with a trailer built mostly with stud-less Technic pieces.
The core of this concept is the possibility of using just stud-less Technic pieces to build a really small semi tractor that contains required motors and the battery/hub is to be mounted in the trailer.
UPDATE 5.10.2020 - New model created to test and prove that it can be made with control+/powered up/Technic Hub motors and have properly detailed cab interior with openable doors.
I'm generally not fond of making full showcase videos - I like building mechanisms with Technic, but making a video composition with good timing, music and descriptions feels like a chore/work to me. Below you can find feature footage so you can take a look at what interests you instead of scrolling through a lengthy showcase.
This model does not have any motorised feature in the trailer as I was really short on some crucial pieces to make it fully rigid, so the trailer is just a proof of concept that the new Technic Hub can be fitted in such small scale trailer neatly. Most of the cab is reused from my other model, the Mini RC Tow Truck.
The model obviously has working remote control for movement and steering. The speed/output of the drive motor is set to 50% because otherwise it would be hard to control within limited space of photo scene.
It is really easy to fit a motorised ramp with L-motor between the wheels in a 6 wheeled trailer like this:
Ramp could also simply be spring snapping into either position if it was to be a simple two-motor kit. The trailer can have various functionalities depending on the theme, but the core of the idea is working regardless of that.
The model is modular and consist of few assemblies that are attached to a really simple base chassis which is built around two L-motors. Thanks to that, the chassis can vary in length, could potentially have Technic Hub in the middle, and the whole model should be easy to assemble in separate steps.

There is a potential for building a B-Model for this kit that would use the same cab as tractor to build a longer standalone truck with some kind of functionality where battery pack/hub is mounted in place of trailer saddle or a B-model could be a longer truck with battery installed between the cab and rear axles. Depending on amount of bricks (especially the type of the trailer implemented), the B-model truck could be pulling a four wheeled trailer with its front axle using turntable to rotate towards the truck hook point or maybe we could have a simple car to carry around as a cargo for a tow truck. 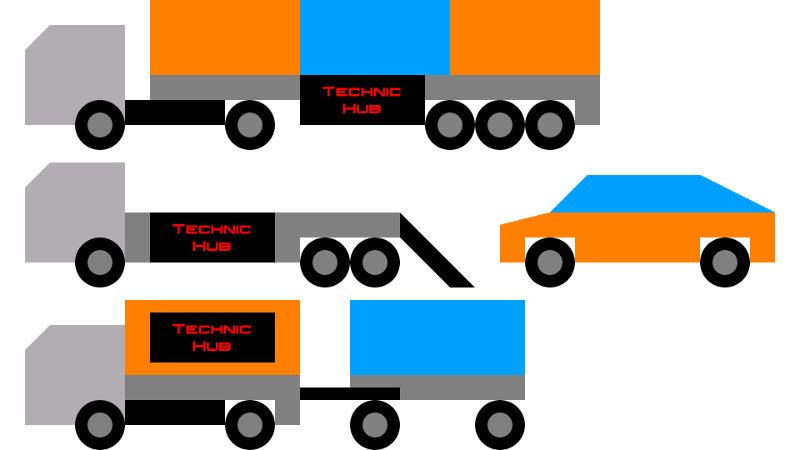 Features:
- mostly built with stud-less Technic pieces (except for mirrors)
- detailed cab interior with steering wheel, steering motor in place of engine cover and seats with armrests
- open'able cab doors with window frames
- neatly fitting motors inside the tractor and Technic Hub inside the trailer
- radio controlled movement and steering
- working differential with wheels smaller than differential body
- details around the sides that are hiding the motors and Technic Hub in the trailer
- modular construction of tractor allowing for potential re-use of cab in B-model with different chassis
Why does it make sense as a LEGO Ideas set:
- has balance between fun gear mechanics, interior/exterior details and making enough structural integrity to support the weight
- contains multiple wheels, gears and motors so it could be a new go-to RC set for MOC creators community
- the amount of bricks is similar to medium sets in contrast to other motorised sets with more than two motors which are really big
- does not base on IP/trademark so again it won't require to license the IP
- has potential to have a great alternative B-model of a standalone truck maybe even with a four wheeled trailer.
The model in a final kit could have between two and four motors depending on what kind of trailer functionality would be implemented - from simple container or full "canvas" enclosed trailer, oil tanker trailer which don't require additional motors, but would leave a lot of room for cool details, to a trailer with a crane, a one with raised or sideways titled dumper, or transport trailer with motorised ramp and a winch. The core of the concept works and doesn't change regardless of what kind of trailer we want to make.