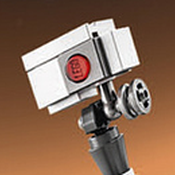 By Perijove
15 comments
This is a model of the Mars Science Laboratory rover, named Curiosity. The real rover is currently on Mars with a mission to investigate the past and current habitability of the Red Planet. On August 5, 2012, it touched down at Gale Crater, near the equator. This model has a fully articulated arm, deployable mast, and a working rocker-bogie suspension system that allows the rover to climb over large rocks and keep all six of its wheels on the ground.

A LEGO Digital Designer model (right-click "Save As") and step-by-step .pdf instructions of the Curiosity rover are now freely available to enthusiasts and educators who want to build a rover with their own pieces. All of this, along with more information about the pieces you'll need, including part numbers, can also be found on Rebrickable. I'd love to hear from anyone who builds or uses the model. Pictures would be awesome too!

As thanks for all the support, I have added digital models of the Descent Stage and Sky Crane Stand to Rebrickable so people can build the popular Sky Crane model shown in the image below.

The real Curiosity rover is about the size of a small SUV, over 7 feet tall (2.2 meters), and weighs almost 2000 lbs (900 kg). It uses scoops, cameras, drills, a powerful rock-vaporizing infrared laser, and 165 pounds (75 kilograms) of scientific instruments to perform its investigation.

I am a Mechanical Engineer who worked on the actual Curiosity rover at the Jet Propulsion Laboratory. I combined this first-hand experience with my LEGO hobby to create a LEGO model that was as faithful to the actual rover as possible in terms of accuracy, details, and mechanical function, while remaining at a reasonable size and cost. The primary purpose of this effort has been to contribute to the educational outreach for this incredible mission. It is my hope that this model encourages the public support that is integral to the continued development and exploration of outer space.

Anyone curious for more, can find additional images and a short video of the rocker-bogie system on my Flickr page. There are also pictures of a Descent Stage and Sky Crane model.

Be sure to check out NASA's latest video about Curiosity's Seven Minutes of Terror. Visit the official Mars Science Laboratory website to learn more about the real rover and its mission. 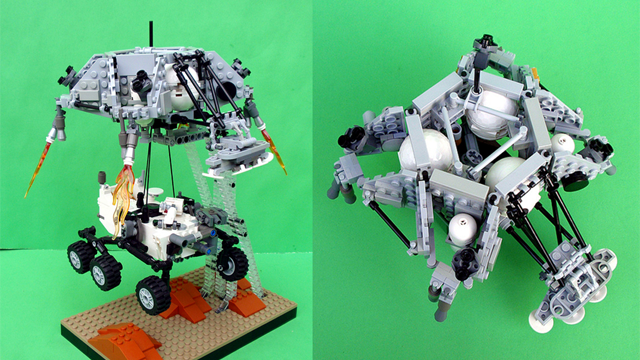 This project has mainly been about the Curiosity rover, however, there has also been a lot of interest in the Descent Stage and Sky Crane models that I also created. I would have no problem with LEGO including them in a set. 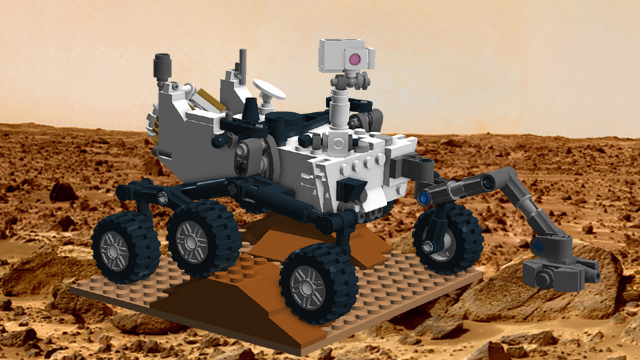 Screenshot image of the LEGO Digital Designer model of the Curiosity rover.

The goal of the rover is to determine whether conditions favorable to life could have existed on Mars in the past or the present. It will also explore the climate of Mars, its geology, the weather, investigate the radiation environment, and prepare for future human missions.

The suspension system on this model works the same way as the real one, with an offset differential mechanism. It has proven to be very robust and fun to play with when handled by children and adults alike. 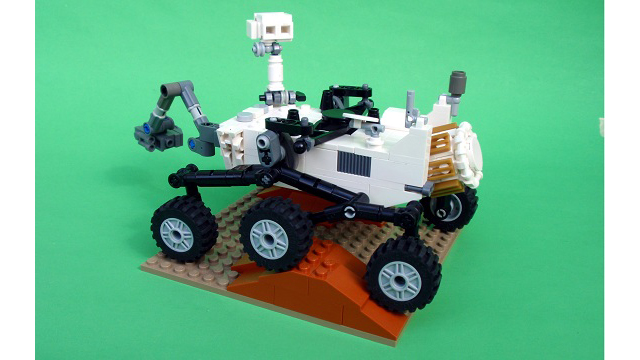 Instead of solar panels, the Curiosity rover uses nuclear power in the form of a radioisotope thermoelectric generator (RTG), which can provide continuous power to the rover. It is the cylindrical portion located at the rear. This power source will last much longer than the designed lifetime of 1 Martian year (almost 2 Earth years), allowing for extended missions of exploration. 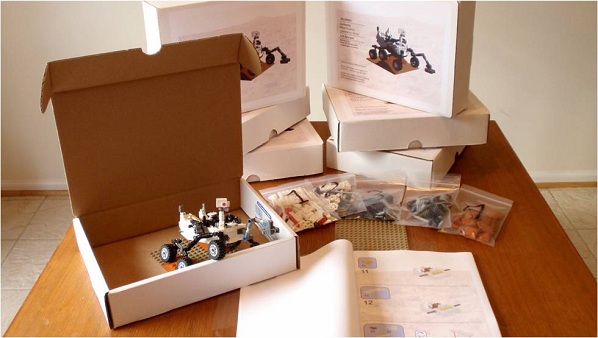 To further my own effort of contributing to the outreach for the Mars Science Laboratory mission, I created seven LEGO Curiosity Kits (one for each successful Mars landing) that I have donated to various museums and organizations to help out with their own educational programs.

Kits have been sent to the Smithsonian National Air and Space Museum locations at the National Mall Building in Washington, D.C and the Steven F. Udvar-Hazy Center in Chantilly, Virginia. Additional Curiosity Kits have gone to Scienceworks at Museum Victoria in Australia, the Jet Propulsion Laboratory Mars Public Engagement Office, and The Planetary Society. One kit was also donated to the Charity Auction at the 2012 Brickfair LEGO fan convention in Virginia. The final kit has gone to the Solar System Ambassadors Program.