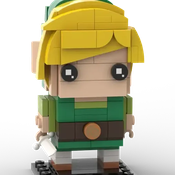 By d4rkb33m0
7 comments
This is the lobby from the 1970s show Fawlty Towers, it comes with 3 minifigures, Manuel, Basil Fawlty and Sybil Fawlty. It has a fire alarm by the front desk. Under the front desk is a bunch of mail that has not been opened, on the desk is a two newspaper, there is a chair that's black. It has some stairs that are brown and by that is a door to the diner. I have not built the diner because… no. The roof is completely removable. I thought this would make a great LEGO set, since they made other TV show sets. Both iconic shows everybody loves, just like Fawlty Towers. I built it because I love the show, it's so funny and interesting.
Anyway, back to the set, there's a flap leading to the staff room. Basil Fawlty (the guy in the set) is the owner of Fawlty towers, his wife Sybil Fawlty, and their "trusty" helper Manuel, who is a cheap Spanish employee. The minifigures are not accurate, but the set is. Anyway, that's all. - d4rkb33m0