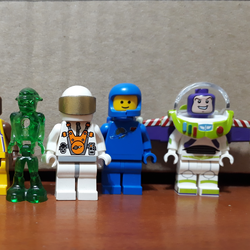 space jam is a live-action and animation hibrid movie , that premiered at 1996 , starring michael jordan and the looney tunes characters.

the set is based in the third act of the film ´´the ultimate game´´ between the tunesquad (jordan and the looney tunes) and the monstars .

the set is easy to build for everyone , with a play feature for michael jordan to make a dunk , and several places in the basketball half-court to play .

there´s 4 minifigures , michael jordan and buggs bunny with their tunesquad outfits and 2 aliens from the monstars.

personally as a basketball and cartoon fan , this movie is really special for me and see a set based on it with icons like michael jordan and buggs bunny we´ll be awesome for me and I expect for a lot of people to