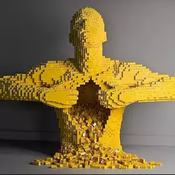 My project consist of a scale model of the British Red Telephone Box. It is mostly composed of red bricks and its door and roof can be opened.

First appeared in 1926, the Red Telephone Box is one of the most photographed objects by tourists in London. This project intend to honour it as one of the most iconic symbol of British culture.

The Red Telephone Box model could be a decorative object for every vintage style lovers, or an ornament for the children’s bedroom. It’s really something that any Lego superfan wouldn’t miss for anything in the world..help us take it to every Lego store!