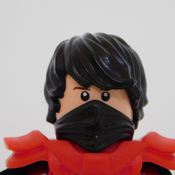 By Silver42
7 comments
Peaceful fishermen sail on calm Asian seas when suddenly the lookout spots a black mass approaching at high speed on the surface of the water: the kraken! There is panic on board.
Eight tentacles come out of the water and fall on the ship which cuts itself in half. Only the parrot will survive this attack and will be able to tell this terrible story.
The boat:
- has an anchor which can be lowered or raised
- possibility of breaking the mast
The kraken:
- can swallow the characters
- can be separated lengthwise to move horizontally
- the mouth can be detached to face up the sky
- the tentacles break off
The set:
- a kraken
- a fishing boat
- three fishermen
- a parrot
- many accessories: a barrel, a chest, a telescope, two torches, a flag, a pole and a net for catching three fishes.