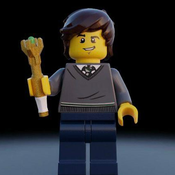 By Jack_gallifreybricks
29 comments
I have always been a huge fan of history, though with Ancient Egypt, I have always been interested in the period, but it was only until recently that I have actually explored it more in depth. I have been able to work with relics from Ancient Egypt, and doing so, gave me an idea to design something in Lego, that represents some aspects of Egyptian history.
For that reason, and for never actually having submitted anything before to Lego Ideas, I decided to design a fully enclosed, and rather realistically sized, Lego pyramid. The design process was rather fun, as I used real pictures of pyramids, to come up with a fairly realistic interpretation of one, using Lego pieces.
What I think would make my build a great set, is the fact that it caters to both the old and the young. It caters to the old because of the fact that is is a rather good display piece, and it a rather complex build. And it caters to the young, because the top part can lift off, which gains access to the interior, where children can play with explorers as if they just found what was inside.
Also the design of the interior and exterior details aren't that much, giving people the chance, if they want to, to put their own stamp on the pyramid. Because that is the beauty of Lego, you can make whatever you want.