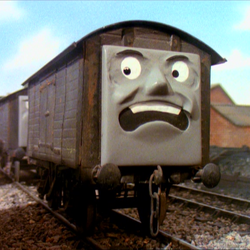 Trainboy7
2
Ever since 2011, we haven't seen any new Trains for the Lego City Series.

I know for a fact that they'll never give up on them as they're coming out with some new Lego Duplo Trains for the young builders.

so for Train fans like myself, I give you the Lego City Subway Express.

its sort of a remake of some other classic Lego sets but slightly different.

as far as any power goes, its a push along toy train for now, unless I can figure out an easier way to make this train motorized.

Track, people and a Station will be added soon.

Here is a side View of the whole train.

And here is the front of it.