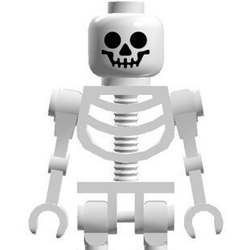 A Ship Wrecked shows a pirate ship which has crashed on an abandoned rocky island.

The only remaining pirate built a fort out of the end of the shipwreck on the island by a waterfall, and has been waiting to be rescued since the dreadful crash.

One of his fellow pirates has just discovered him from afar and is now rowing to shore to save him from a killer octopus who is roaming the seas.