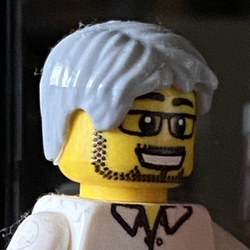 *Based loosely on a previous idea I had for how to soften the end of a row of modular buildings, this is a revised, improved and more sturdy creation.
Have you ever looked at your Modular Street and, if you are unable to position a corner modular at the end of your build, thought about how to hide that ugly blank wall of the last modular?
The Arches is a modular 'end piece' for your street that adds detail to the end of your creation, and a talking point for your mining citizens.
It's modular design allows amazing flexibility for how it can be used in your Modular Street.
Modular design:
Joe's News Shack Kiosk features;
Slurp ’n’ Go kiosk features;
Billboard features;
Viaduct features;
Comes with 4 minifigures:
41