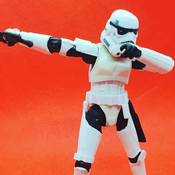 As you can see from the photo, I built the two helixes from different colours, which makes them stand out quite nicely, so you’ll need twenty of each colour.

Of course, you’re going to need to make about 220 million base pairs if you want to model your own DNA and that’s a whole lot of Lego… Too much for this model, anyway...