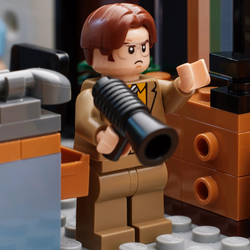 In 2020, it will be the 15th Anniversary of the hit TV show, “The Office”.  The US version of The Office aired on NBC from 2005 to 2013 starring Steve Carell.  It is also one of the most popular shows on Netflix, with countless new fans joining the Office fandom every year from all around the world!

The Office is my favorite TV show, it is the show I go to if I need a good laugh or a smile.  I've lost count of how many times I've rewatched it. I have all the bobbleheads, countless T-shirts, I'm obsessed with it.  I love it so much that four years ago, I created the very first Lego The Office set. I was lucky to have the support of several of the cast and crew with my first prototype, as well as the support of so many incredible fans!

My first Lego The Office proposal reached 10,000 supporters here on Lego Ideas and was reviewed by Lego about a year ago.  Sadly it was not approved, but I learned a lot from the experience that I used when redesigning this version over the last year. In honor of the 15th anniversary of The Office coming up next year, I created this new version that I feel would have a better chance of being approved by Lego for all Office fans!

Supports a 2-in-1 Design

If you would like to see a Lego set based on The Office, please click the “Support” button on this page to vote for this set and please spread the word on social media!  We need 10,000 supporters to vote for the set to get to the official review process with Lego.

You can follow my various social media pages for more updates and news too (links below)!