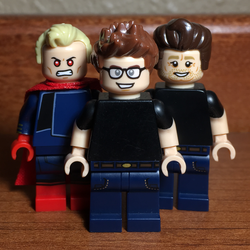 Stuntman Brick
16
Inspired by the brilliant films of Robert Rodriguez, this project depicts the speedy N-I-X Super Guppy during the escape and chase from the first Spy Kids film. I grew up with the Spy Kids films and love them dearly, and I wanted to pay tribute to them the best way I could...with LEGO! With this project, I aimed for total accuracy to the source material on both the vehicles and figures. Ideally, this set would contain roughly 200 to 250 pieces, making it a relatively small addition to the LEGO Ideas line, but impressive, nonetheless.
Complete with Super Guppy and speedboat, this set includes Juni Cortez and two disguised Thumb-Thumbs Two stud shooters allow Juni and the Thumbs to square off properly.
Thank you for your support!
Stuntman Brick
16