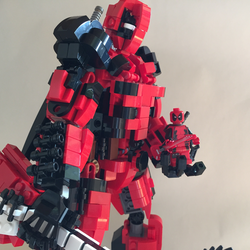 Since Vader decide to depart from Emperor Palpatine. He decided to start a new life with less warfare and more community works.

He is now working as a Postman in the planet Char. Although he wants to live his life with less warfare, but the living environment is still harsh and dangerous.

To ensure he can deliver this drops on time and safely. He build his own rider with his own iconic image. While parking, it will be his iconic helm. When it's on the road, it will transform to be a speeder.

May the force be with you!!