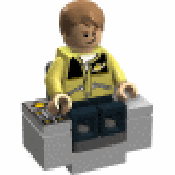 This blue construction trailer is an essential part of any construction site. The model perfectly fits to set 60073 Service Truck City Demolition and it also looks great with set 10750 Road Repair Truck Juniors.

The set features a removable roof for easy access to the interior. Inside the trailer there are two clips to hold the included tools such as a shovel and a cowbar.

The model (as shown on the pictures) consists of approximately 180 parts, including