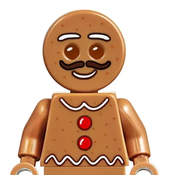 By Stikkman007
18 comments
♫ Oh! The good old hockey game!
Its the best game you can name!
And the best game you can name,
is the good old hockey game! ♫
It's game 82 of the NHL regular Season, and we're heading to 3-on-3 overtime with a trip to the Stanley cup playoffs on the line... Who is going to reign supreme? Who is going to be the hero???
I tried to replicate a modern day North American Hockey Rink as best as I could, with functioning doors for both the forwards and defenceman on each teams bench, as well as functioning doors for the penalty boxes, the away team entrance, and the Zamboni entrance. Of course since there is a Zamboni entrance, I also had to include a Zamboni as well. There is a time keepers box located between the two penalty boxes, and water bottles can be found littered around the benches.
Unfortunately, the goal nets don't have any netting on them, and I was unable to make the boards have any glass (due to the rounded edges). But I welcome any feedback on how to resolve these issues!
I decided to build a hockey rink replica after finishing the Icon Lego set Camp Nou (the replica stadium for FC Barcelona), and realizing there were no real hockey Lego sets out there.
I think this set would appeal to both casual and hardcore hockey and sport fans, as it is easy to distinguish, and easily recognizable. I believe having it as a generic rink will appear to a larger fan base as it does not bring any emotional connections to teams into play. This build could also be a great addition to anyone who is into collecting winter or Christmas sets, as it could easily be presented as an outdoor rink that can liven up a town or build.
Please let me know what you think, and any suggestions you might have to improve the build, as I'm always looking for feedback and to chat!
Thank you for taking a look and showing interest in the build!