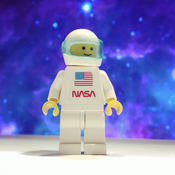 Icon of a generation, the historic Space Shuttle did so much for connecting the world, exploring deep space, and conducting groundbreaking research. This set is built to the same scale as the Lego Saturn V, and would make the perfect companion piece!

In 2019, the California Science Center will finish construction on an unprecedented display of the Space Shuttle Endeavour, setting it in its vertical full stack configuration, with Orbiter, External Tank, and Solid Rocket Boosters as if ready for liftoff. What better way to celebrate this achievement by remembering this iconic ship in Lego!

Over half a meter tall, this Space Shuttle is in scale to the Lego Saturn V, and would make the perfect companion piece.

Please share and let others know about this project to make this a reality that you can bring home and build!