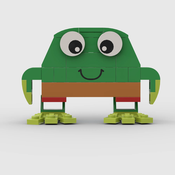 By GreatestTopHat
15 comments
The Bloons TD series is a series of tower defense games, taking elements of the original Bloons game into a tower defense style. Throughout all games, the main goal is to pop as many bloons with towers as possible while preventing the floating bloons from reaching the exit. In these games, most of them are single-player, supported mostly by pre-determined rounds. Because of how popular this game series is, a number of additional spin-off games in the series were created such as the Bloons TD battles games.
This is build is a basic dart monkey and ice monkey with red and yellow bloons in brickheadz style. If this project reaches 100 supporters, more monkeys and bloons will be added and evolutions will be added too.
I built this because I feel like bloons should definitely get their own LEGO franchise, and this will hopefully lead the way. This would be a great lego set because
1. its cute
2. it works really well.
3.Bloons deserves more recognition.
Let's get this to 10000!
Made by Top Hat Guy