Bionicle – Toa in the Temple of Time 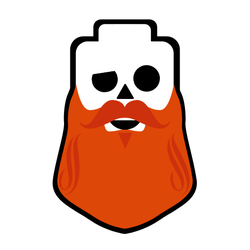 This is part 1 of 6. So in this update, I am imagining smaller sets that are more affordable and expand on the universe I am creating.

The idea is to add to the existing Bionicle lore and rewrite it. A lot of the old fanbase is still about, but I think the story needs to be renewed in some way to draw in new fans as well. Absolute devotion to old lore risks alienating new fans, and I don't want to do that. I want a compromise.

Gali's Golden mask is hidden behind a stone seal. Only with her Toa Tool can she activate the ancient clockwork lock, but the Virtue Crab wants to stop her.

The Virtue Crab is, like the temple itself, an old concept I have brought back to life. The claws and eyes mimic the ancient symbol of the Bionicle, something which has intrigued Gali. Is this creature truly the fearsome beast the Matoran claim it to be? Or is it something more?

There's a control panel at the back of the crab, but the front is much more interesting. Silver spikes and claws seem to protect the crab from potential predators, but what could exist that is big enough to challenge this creature? Perhaps with her golden mask of power, Gali can swim to the depths and find out.

I have loved doing this, I wish I could have updated/promoted it more but life got in the way. I am back now however!!!

A prototype for gear functionality.

This is just a prototype.

A full video of this can be found on my Youtube channel. Its legs move up and down as the central wheel moves. This will later be replaced by a horizontal movement, to give the illusion of scuttling legs. It may be replaced by a moc of the Nui Jaga, but on minifig scale.

Thanks for all the votes. Keep your eyes open, more projects are on the way. 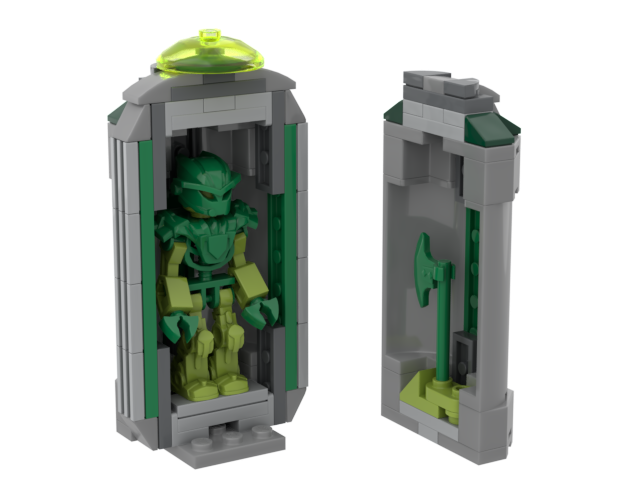 Gathered friends, listen again to our legend, of the Bionicle:

The Toa Canisters were one of the most iconic things about Bionicle, they were the mysterious vessels that brought the Toa from an unknown location to the island of Mata Nui, and that took six matoran to the island of Voya Nui some years later. They are the delivery system for the heroes of the Bionicle universe, and in this new take on that universe I thought the canisters needed to return.

As I completed the rest of this set before finalising my concept of the canisters, I decided to post the set without the canisters at first. Now I have completed them, I am ready to show you what I've been working on these past few days.

In the "Toa in the Temple of Time" set, there is a pedestal which turns to unlock the chamber that holds the Mask of Time. I had thought to use the canisters as the keys, but they proved too big, so I opted for Toa tools instead. But I wasn't going to abandon the minifigure scale Toa canisters concept, it needed to happen.

Fun fact: The rotation aspect of the pedestal is inspired by the Bionicle board game (the first one). I used to spend my afternoons waiting for mum to come home so I could beg her to play it with me. It remains my favourite board game, even though I'm still not very good at it.

To create these, I looked at the canisters and early concept art/advertisements for Bionicle from 2001/2002. I also found my old canisters and set them up in my room. Then over the next few hours I tried different techniques. The first was to use a 4x4 shape, but I couldn't add any detail and the Toa didn't even fit!

The next idea was a 6x6 shape. This was too easy with cylinder pieces, and I wanted it to be thinner and more split up. I needed more detail.

I finally came across a 5x5 design. This utilises relatively new parts, such as the 1x1 brackets and quarter cylinder walls. The grille pieces at the sides actually hold the structure together, and leave room for a tool rack in each canister. This enhances playability and enables the Toa to realistically fit in with all their gear, stood up and fully assembled, ready for action!

With the 5x5 design there is even room for windows (if I were to replace a grille with a transparent tile and the plate behind it with a transparent plate) but in the end I didn't think this was appropriate for the design. The canisters are supposed to protect the Toa, after all, so a window didn''t feel very safe for them. There are no sunglasses in the Bionicle universe, and they were floating at sea for a long time. 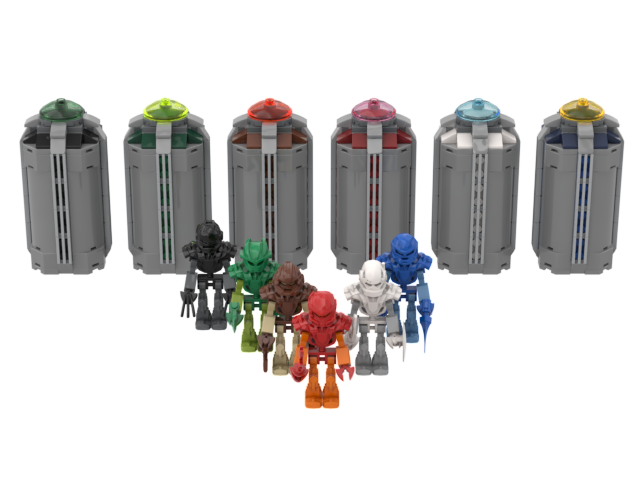 The tops of the Toa Canisters feature transparent dishes in the same colour as the original Toa Mata's eyes. Tahu's is pink, Gali's is neon yellow, etc. These are meant to symbolise the Toa themselves looking out into the universe they are about to explore, and to reflect that same infectious curiosity that entranced fans of the original Bionicle themes.

The top of each canister also features the darker version of the Toa's colour. For example Tahu's is dark red and Gali's is dark blue. This is a reference to the Toa Metru from 2004, and their own canisters.

The bird in the image with Kopaka emerging from his canister is a reference to an early official Bionicle image in which a biological creature is seen pecking at the top of an open Toa canister. Images like this have stuck with me throughout my life, and inspired a sense of adventure and mystery in the original Bionicle theme.

The six Toa in these canisters are based off the Toa Mata, whereas the original ones in my first project post were a mix of the Toa Nuva and my own take on the theme.

Pohatu had tools on his feet in the original line, so to avoid making him a lot taller than the other Toa, I gave him rock cleavers for this incarnation.

The side opening door of the canisters, whilst not faithful to the original designs of 2001, enable easier play and feel more like medical or meditation chambers, where the Toa might return to heal after expending their elemental powers saving the island of Mata Nui. The canisters are a peaceful place for the Toa, where they can collect their thoughts and perhaps stargaze through the mechanical eyes atop the canisters. 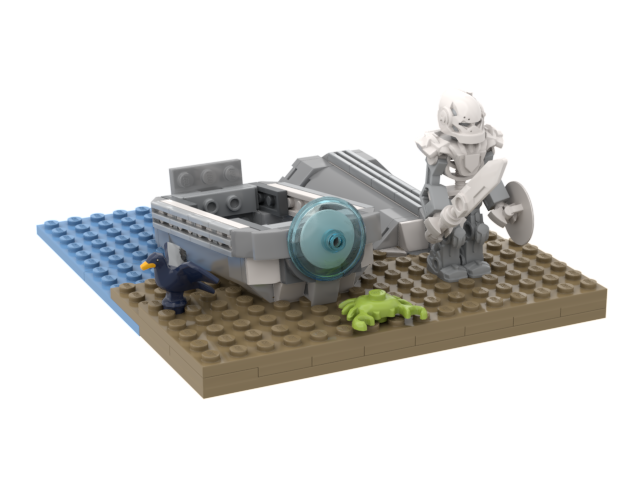 The Toa canisters are more solid than they look. The 1x1 brackets on each side hold them together tightly, so they can be played with and rolled around without anything major falling off.

The canisters feature an opening compartment. This isn't the same as the original design, but is my own take on it, allowing the Toa and their tools to be packed more tightly than if the canisters were to open from the top.

As the canisters are brick built, there is potential collectability in them becoming part of an arrangement or combination model. I am already imagining a potential rack and conveyor belt which might store and launch the canisters to their desired location.

Each canister is colour coded to its respective Toa, and can be taken apart and used in different ways. For example, it might make a good makeshift boat for Tahu, if he should need to find Gali out at sea!

Each canister has room for one standing Toa and a tool rack, enabling an accurate representation of a new Bionicle universe. (There's even room for a control panel, but I haven't added them. That feature disappeared with the windows. The canisters should be self-piloted)

Any Toa can fit in any canister, as can the Turaga.

These canisters would fit neatly in a small pocket, so you can bring your favourite Toa safely in their canister to meet your friends.

Another Fun fact: My first Toa was Toa Pohatu. But my favourite is Lewa.

Smaller creatures for the Toa to face

Add more playability to the pre-existing things in the set

Potential for a mechanism that breaks open the canister? Could use a gear and a liftarm in the top, but this might make them too bulky.

Show fans of the project the earlier designs of the canisters, as well as a cross-section of the covered up gears in the chamber of the Mask of Time.

Thank you all for the incredible support this project has gathered so far. You are all brilliant. I am still in awe with how many people have voted and posted nice comments!

I love Bionicle. Always have, always will. It is the reason I got into writing, and to return to Lego after university with new skills to create this and give something back to my fellow fans has been amazing. I wish I could show my younger self, I wouldn't have ever believed it. This is already one of the best experiences in my life and it's only just beginning. 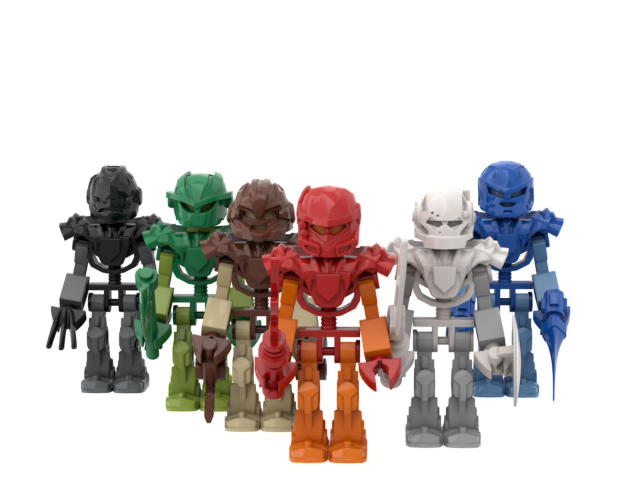