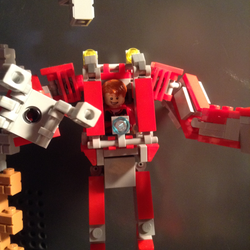 The Rebel Alliance GR-75 Medium Transport is a space craft from the Star Wars Universe. This transport can be seen in Episode V The Empire Strikes Back, Episode VI Return of the Jedi and most of the Star Wars video games such as Battle Front and the Rouge Squadron games. This is a mini scale model designed to be accurate with the scale. The set includes an opening cargo ramp and a 1x6 plate on the bottom of the transport for anchoring to any LEGO platform.