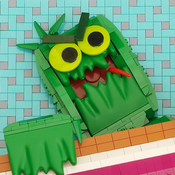 A big Thank you for supporting my little Forest Elves!

Just as we are about to hit the 10.000 supporters with the Mushroom House I want to thank you all one more time for the amazing support! I still can’t believe how fast we reached the final milestone.
Thank you so much for your votes, your comments and for sharing my project with other fans. It’s been an amazing journey on the snail mount and I’m looking forward to the LEGO winner announcement which we can expect around February 2023.
Last I wanna share this very cute drawing of my Mushroom House I got as fan mail from Hannah (6): We are so close to reach the final milestone!
Thank you so much everyone for your kind support! We are in reach of the magic number and might make the Mushroom House happen.
Please keep supporting and sharing the project with your friends. The little Forest Elves will thank you.

Update: A new way to display the Mushroom House

Thanks to all your support we are on a very good way to make the Mushroom House reality!
Today I have a small update for you as I thought about a more flexible way to showcase the house, which was originally designed to be one closed building.
It still can be closed, but with an extra window on the back the opened model looks a bit like you have two Mushroom houses and the start of a small Mushroom village - all from one set! How do you like that idea to showcase the Mushroom House open on your shelf?
On May 23, 2022

8000 SUPPORTERS FOR THE MUSHROOM HOUSE!

We reached 8000 supporters!
Thanks for the great support of my project and lifting the Mushroom House to the next milestone.

We reached 7000 supporters for the LEGO Mushroom House!
Thanks a lot for your never ending support! We're now at the next milestone and one step closer to the magic 10.000 votes.
Please keep sharing the Mushroom House with your friends and fellow builders. Together we can make it become reality!

The Mushroom House is still growing and we reached 6000 supporters!
Thank you so much for all your votes on the way to the next milestone! Together we can make it!
Special thanks to BrickinNick and the BrickBuilding Community! Also BooneBuilds and Back2Brick for sharing my project!

5000 SUPPORTERS FOR THE MUSHROOM HOUSE!

We reached 5000 supporters and are now half way there on the road to 10k!
Thanks to everyone who has voted and shared the Mushroom House with fellow LEGO fans! We are one step closer reaching our goal of 10.000 supporters, which might make this project become an official set.

Who said that snails are slow? We reached 4000 supporters for the LEGO Mushroom House!
Thanks to all of you who helped reaching this milestone. I'm still overwhelmed by the support.
Please keep supporting and telling you friends!

A new day, a new milestone: The LEGO Mushroom House reached 3000 votes!
Thank you so much for the massive support for my project. We are on a very good road to make this idea become reality!
Special thanks to the Reddit Users who came over to support and everyone who shows their love for the Mushroom House in the comments! You're too kind!

We reached 2000 supporters on the LEGO Mushroom House! It's growing and growing.
Thanks to your amazing support the Mushroom House is one step closer to getting the chance to become an official LEGO Set!
Special thanks to the RogueBricks Community who supported & shared this project and also gave the original inspiration to explore the Tiny World of Wonders! Let's make the fantasy world reality!