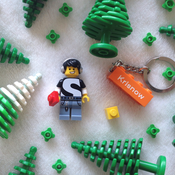 From a long time ago, I wanted to build a Lego Store with a pick-a-brick section on a wall from the bottom to the ceiling. Finally, I built one based on the concept of a stand-alone Lego Store which is about to open after a long period of renovation work in an old building of New York.

I have decorated the exterior with classic look and feel to make the building to be well mixed with other modular series. On the contrary, the show windows and doors on the store front were built with black and transparent bricks for a modern style.

I also added a small storage at the back of the building for the carton boxes. The main wall of the storage can be opened to show the inside. The roof with windows can be also opened to lighten the pick-a-brick section enough.

The unique part of the exterior is the decoration with technic gear bricks on the front side of the roof. This trade mark of the store is designed to give a strong impression to customers.

Obviously, the main wall of the inside of the store is mostly for the pick-a-brick section. Next to it, there is a small section for polybag products and small boxes. On the left side of store floor, there is a build-a-brick section and the opposite side has a cashier counter.

On the left wall, Lego boxes are stored and displayed. Interestingly, I used those unique colors of actual Lego series to representing them with simple tile bricks. Dark gray is for Star Wars. Red is for Super Heroes. Blue is for City. Purple and pinks are for Friends. Dark blue is for Modular. Green is for Ninjago and Black is for Technic.

I am very much happy with this Lego Store which can be a part of my modular collections and confident that you will support this idea to make it the next official modular product for all Lego lovers.