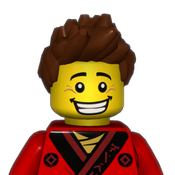 By LuckyBlock98
10 comments
A Robot with a sword and a blaster. It also has twin back forward thrusters, and another thruster in between the legs. It's designed to be easily rebuilt to change versions.
In the standard Fire version, it has a simple blaster and the thrusters shoot fire. In the simple Water version, the eyes and center are turned blue, as well as adding blue pads to the front of the feet, and the thrusters are replaced with fans. In the Ice version, the accents are white, the shoulder pads are replaced with simple tiles, and the tips of the feet are transparent light blue. In the Lightning version, some accents are yellow, the blaster has a rotatable barrel, and it wields stun bombs in place of thrusters. Finally in the Wind/Flight version, the fans are back, and some accents are lime and green.
I started out building this with the intention of it being a protector robot, then I created alternate forms for the robot, based on elements, I also was thinking of Dark Man 4 from Mega Man V while designing it, even briefly having it with a clear head like him. It's designed to be easily rebuilt to how you like it. I think that this would be a great lego set because it's very easily rebuilt, so you could rebuild it to match your liking.