The Three Investigators - The Headquarters 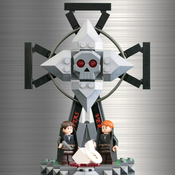 “May we show you our business card?” (Justus Jonas)

In German, three question marks are the symbol as well as the title of the Three Investigators books. They’re a detective team made of Jupiter, Peter and Bob from Rocky Beach California. “We take on every case” is their slogan which is also written on their business cards. They don’t shy away from risky situations or danger. Their trademark, the three ???, stand for the unknown, unsolved cases and mysterious incidents.

Alfred Hitchcock is the patron of the series and provided the Three Investigators with their very first cases. The series was created by the journalist and author Robert Arthur at the beginning of the 1960s. After their cancellation in the US, the series was continued since 1993 in Germany with their own stories. In January 2020 episode 203 “Tauchgang ins Ungewisse” (Dive into the Unknown) was aired and the success is ongoing.

He’s the second detective and the most athletic, tallest and strongest of the Three Investigators. No closed door can withstand his lock pick collection.

Despite his small stature and lack of physical strength, Bob is quite courageous. He is funny, quick-witted and nothing can unnerve him. In the right moment he always has the required information to hand.

The scrapyard and the headquarter (trailer)

The company led by Justus’ uncle Titus, is a scrapyard located in the suburbs of Rocky Beach.

An old trailer, provided to the Three ??? by uncle Titus, acts as their headquarter since the very first start of their detective agency. It has been modified and improved quite a bit. Apart from a computer, fax machine and other modern equipment, there is also a photo lab and various secret passages on the premises.

This is where the model is located. The headquarter is the first place of refuge in the series and the hub of the Three Investigators. Almost every single one of in the meantime over 200 thrilling cases starts in this discarded trailer.

In this set the three detectives can not be missing.

The trailer accommodates a photo lab, a secret subterranean passageway, a kitchen, a couch, a phone with an inbuilt recording device, fax, a computer and special equipment, a camera on the roof to surveil the surroundings and many small paraphernalia “Whatever the detective may need.”

Included as well are three bicycles, for the stand-by duty of the Three Investigators. Even the circular saw, whose ever constant buzzing can be heard in the background, can’t be missing in this set.