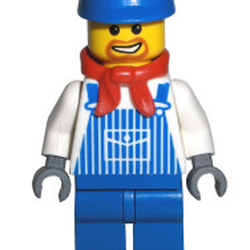 As I was pleased to see that my BR64 model reached 100+ likes, I wanted to reward followers/likers with another model. The original of this second steam loc is called BR99-1590, see also http://udoarlt.de/bahn/bahnen/fo99-51.htm.

This model is in fact an update of an older model, which I made for my grandson. But in time skills of building with LDD raised, so the model is refreshed, better proportioned, and additional piping was added. I made one consession, the central coupling (as used in narrow track railways) is replaced by a more normal coupling. Thus it can be used with the carriages I did build.

[The original model was with an electric motor, which stayed in the update. The last picture shows the old model (with green 'jacket' as often used in Northern Germany.]