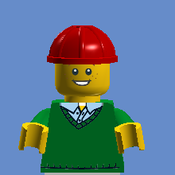 By Agotai
8 comments
This LEGO model is made for a LEGO CONTEST. My first idea was to find something like an icon that everyone knows. Finally, I found one what was for all people means the connection between humanity and space. After that it was easy. I just placed one person in the space and I realized what we can only see is a spacesuit ... So it means anyone could be in that spacesuits ... but definitely a human. Eventually, I realized I had used twice as many LEGO bricks as the contest allowed. So this model has no chance of winning that LEGO competition, but  it will be a chance to wins the hearts of some people. I recommend this LEGO ASRONAUT statue to everyone who is proud of "space-conquering humanity". This model is made of exactly 500 LEGO pieces.