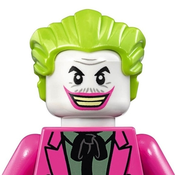 There was a single river that ran from the ocean into the heart of the Valley of Gales. If you followed it, you would eventually come to the dwelling of the scholars. The scholars lived in a ramshackled building that rose from either side of a waterfall. The building looked old and weary and, as the boy knew, housed many secrets within its weathered walls.

The waterfall was a tranquil spot full of nature. The boy would often come here to pick mushrooms, listen to the teachings of the scholars, or to enjoy a spot of fishing.

He could picture his life there, among the scholars. He was fascinated by all they had to teach and imagined that perhaps when he was older, he too would dedicate his life to the pursuit of knowledge. He had an admiration for the scholars. They were disciplined but welcoming and so the boy spent much time there. Though, even to the scholars, with all their worldly wisdom, the Mountain Windmill remained a mystery...

The build uses approx. 2500 pieces and comes with 4 minifigures:

Stay tuned to see more of the story unfold and what mysteries will be revealed! Peace and happy building!