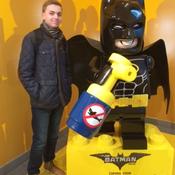 Stingray a Futuristic Submarine from the year 2065 and is the Flagship of the World Aquanaut Security Patrol (W.A.S.P). Stingray is piloted by Troy Tempest and Lieutenant George Sheridan, nicknamed 'Phones' for his role as the hydrophone operator. They protect the Pacific Ocean from invaders and enemies such as the 'Aquaphibians', an aquatic warrior race.

This streamlined vessel was the star of the 1960's Children's TV show of the same name which was shown in the UK, Canada and USA.