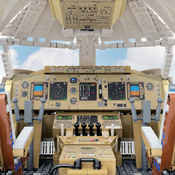 The Boeing 747 Cockpit
Take to the skies and pilot your own Boeing 747 aircraft from the pilot seat! Recreate this iconic aircraft from inside the cockpit itself and play with this fantastic display.
The "Queen of the skies" first flew in 1969 and is still being made to this day! It's been produced in 21 different models and the cockpit - flight deck - layout shown represents the 747-400. But that's not to say it couldn't be a little different! The 747 has a long history of commercial flight and other service such as transporting the space shuttle!
The Boeing 747 Cockpit is a cutaway model and incorporates all the main features including instrument panels, moving flight controls and sliding seats too. Sorry, the flight engineers section would make it too big so is not included.
Main Features
Updates
Check out the Updates tab for more details:
Caveats
The real 747 cockpit is jammed with instruments, panels and storage. Recreating everything exactly was not possible so there are a few caveats with this build:
Why this would make a good LEGO Ideas product
I added this section after the first few weeks as community feedback is rather important and their response has been really satisfying: literally 'wow' and 'amazing' are mostly used and it is certainly appreciated. I think that is key as well, a Lego set which invokes this has great marketability and potential.
Many fans expressed their joy for differentiating an idea from what they normally see and mentioned the idea has a perfect blend of Technic and traditional pieces, non-repetitive, functional and playable. Many aviation enthusiasts and people who work in the aviation industry have expressed they want it including pilots and cabin crew! It should be unsurprising given 88 million people work directly in aviation and around triple that indirectly, including family, friends, gamers, modelers and enthusiasts. There is a multitude of potentially new and existing markets the idea would satisfy.
I set out to do something unique which no one had thought of before yet would still invoke a desire to build/have it. This is what inspired the cockpit build.

Thank you for supporting this Idea and please support my other Ideas too!