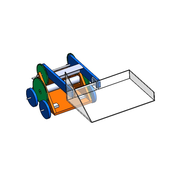 This is a battle car! It has two machine guns, two lasers, one rocket, one motor, and an opening hood. There is armor over the wheels. It has 178 bricks and would have one person. You can get allot of the pieces from car sets. This set is made for ages 14-12. It has variety of pieces.I built this set because it is fun to have a car that has weapons.It would get children building with lego instead of playing video games. This would be a great set because it would get to children to enjoy building to detailed cars and sideways. It would also get them new pieces because it has large variety of pieces.

I built it with my own legos and it is allot of fun.

This set was built on LDD.