This project has one month to run and with only 142 supporters it's going to end. I tried to gather support from outside of LEGO ideas and this resulted in a large increase in viewings but the need to create an account seems to be quite an obstacle. At least 3000 people have seen this project.

Space 1999 projects have appeared from time to time on LEGO ideas, normally models of the Eagle spaceships. There is currently a project by King Arthur which is by far the best LEGO version of this iconic spaceship I have seen at a size that could become a set. I have made this model in LDD and can tell you its a fantastic build, the builder has been ingenious with all aspects of the build creating a very realistic model.

I am probably overstepping the mark - the Eagle is all King Arthur's work but there is so much potential for Space 1999 fans, I've had a few days of fun making the striped Resue Eagle pod, Orange sided VIP pod, a re-entry glider and a set of Heavy Lift Boosters. Not only is there a lot of play value in being able to configure and Eagle there is also the possibility that people may want to have several sets 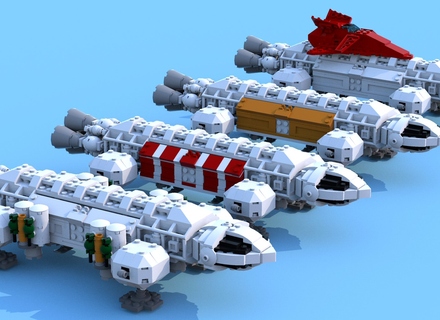 To show how much potential King_Arthur's Eagle idea has here is a full set of Pods plus some extras fans of Space 1999 may recognise. 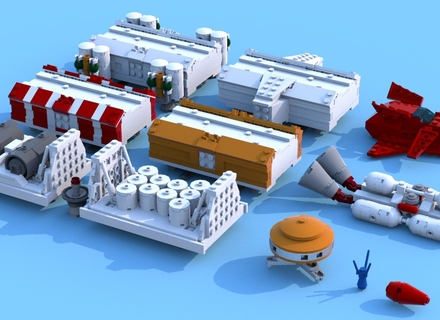 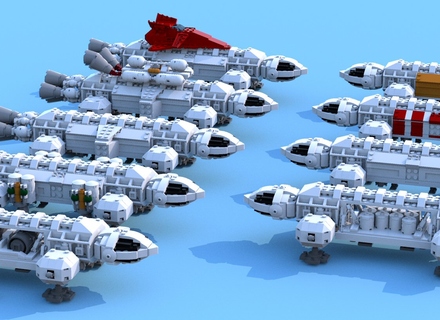 Click on an image to see it full size 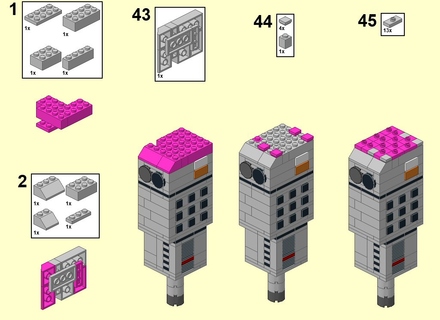 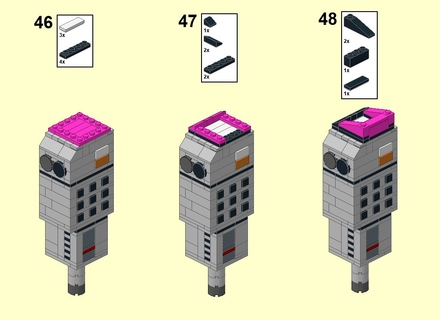 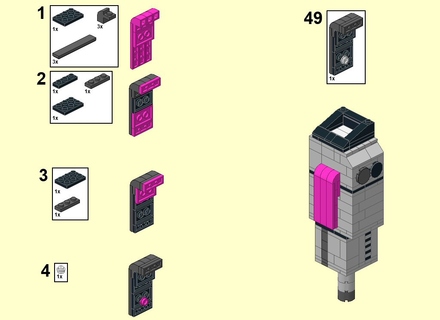 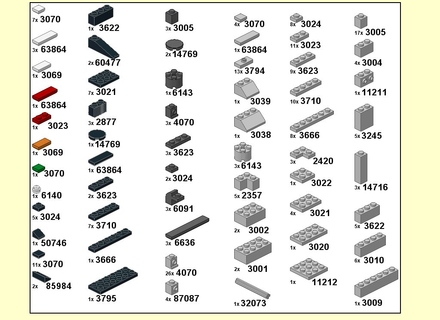 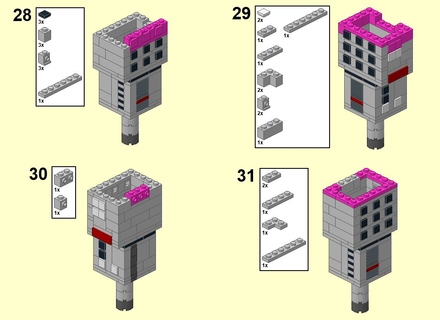 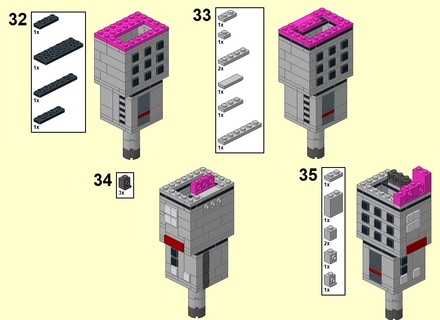 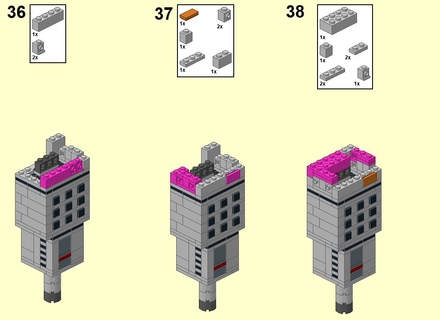 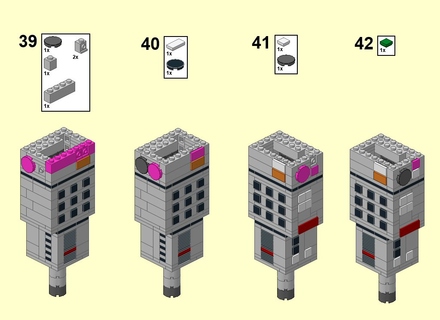 Click on an image to see it full size. 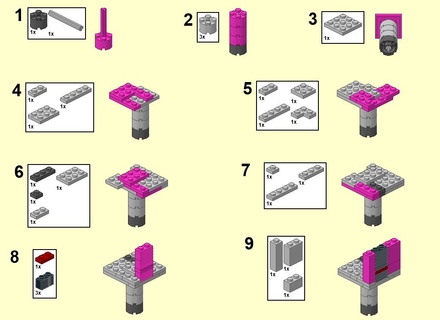 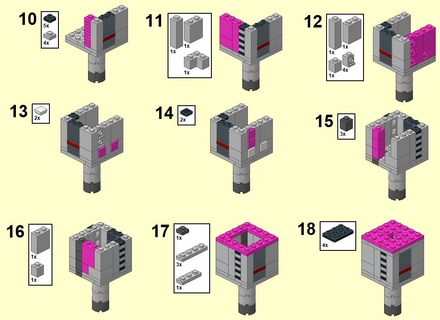 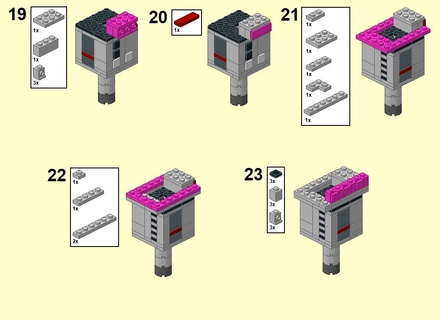 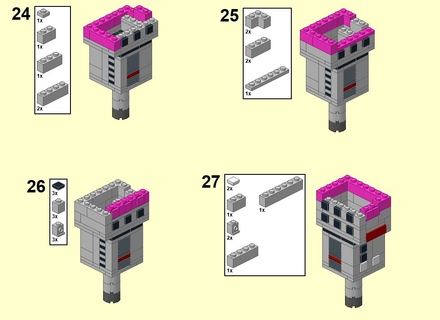 A choice of screen displays 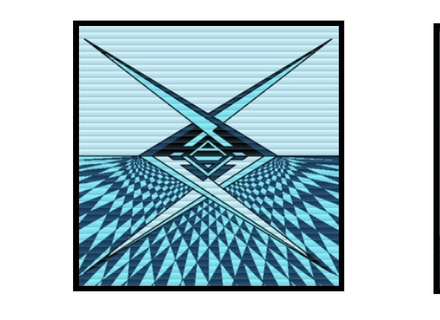 What all the keys do. 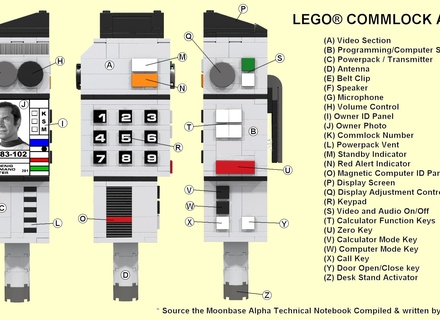 Just how accurate is this model?

I found some dimensions in a Technical manual to compare with the Lego version. The only thing which is not to scale is the weight but that's becasue its not made out of a solid block of wood!

*The Length measurement includes the clip and with the original low profile clip it is spot on. I have made a working clip and this makes the model 1 plate thicker as there is gap to hang it on a belt, with the working clip the dimension is +3mm.

I redesigned the Commlock so that it could be built using standard Lego pieces. I managed to get all of the pieces needed from one source which kept the cost down, I did cost for all of the parts as well and this came to £30 although you may be able to buy them cheaper. I made the back 'clip a little longer and added a few internal plates to aid in the build, once together the build was quite solid but it was a little easier to put together with the extra few plates.

All that was left to do was print out the stickers for the side, screen and keypad and attach them. One accurate Space 1999 Commlock. 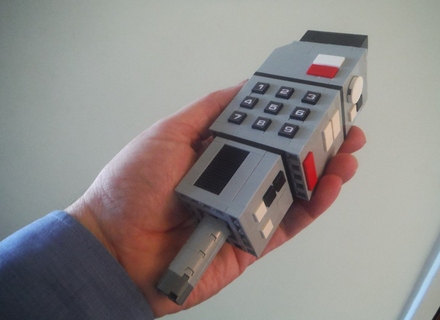 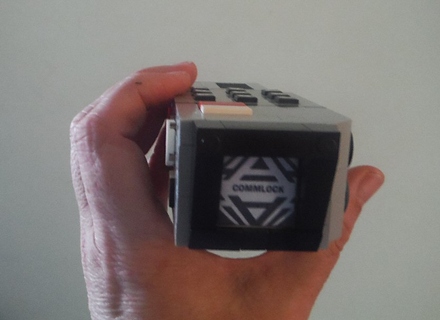 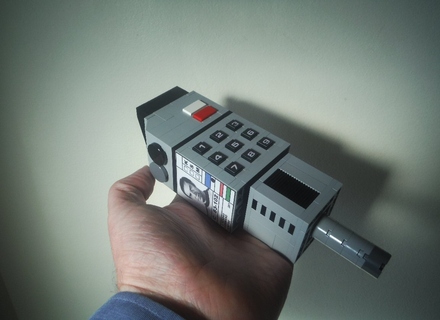 The original model was made solid, it would have been a substantially strong build but overkill for what is essentially a display piece. I have redesigned it as a hollow model, no change to any of exterior features but an added possibility that a screen light could be incorpoated. The redesign has dropped the piece count to 222 which would reduce the cost

I have made up parts of the comlock in real lego to make sure it will build up as ldd suggests. I had to change a plate to a flatplate where the clip joins on the back. There was less clearance than expected and parts were pushing against each other.

Next step is to sort through my lego and order the pieces needed to build a commlock. It may take a few weeks to gather them but I plan for the next update to be a photograph rather than a render.

I had a comment about creating a gun which I hadn't really considered as the originals were hand carved from blocks of wood and couldn't therefore be accurately recreated in lego (unlike the block design of the Commlock).

I've have creating a prototype of the side arm carried by security and the members of the team when on missions to alien worlds. An optionis to extend the Commlock idea into a Space 1999 Gun and Commlock set. I will continue with the development of the gun an post more pictures once it is a finalised design.

Click on image below to see a larger picture. 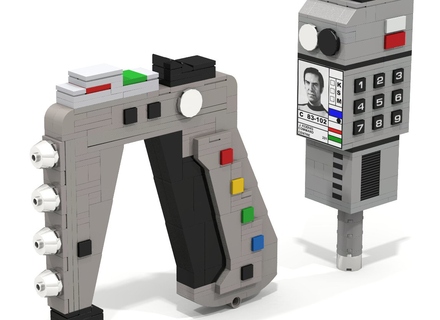