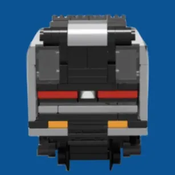 By Cobbz289
24 comments
What is it?
My submission portrays a typical Hong Kong subway train station, known as the MTR. The build consists of a small diorama, which includes a removable platform, display stand and a single passenger train car. The MTR (Mass Transit Railway) is the primary rail system in Hong Kong and has been renowned as one of the most efficient railway systems in the world.
The platform, despite being somewhat small in scale, captures small details, such as a trash can, bench and floor markings. The platform section of the diorama is removable, which can be replaced with another platform design.
The train included is based off the refurbished version of the M Stock train, which has been the predominant model of train on the MTR system since the early 1980s. The train is six studs wide and runs on a narrow gauge type track. Although the train is not minifigure scale, it captures the design and shape of the real train well. The train is very sturdy and feels very solid. I was very satisfied with the build, given its attention to detail, despite the scale.
There are modular style pins on the display stand, which allows for connections to other displays or duplicates, similar to the style of modular buildings.
Why did you build it?
I grew up in Hong Kong and although I no longer live there, the MTR played a large role in my life. I used to take the train almost everyday, it sparked what would eventually become my obsession with Lego and trains. I look back at those times and it reminds me of happy childhood memories. I originally built this as part of a personal collection of Lego models, however, I was very pleased with the way this particular model turned out and think it's overall design is viable for a production model.
Why do you believe this would make a great LEGO set?
I believe that this would make a great Lego set, as it could fill the gap for Lego train sets/models. Even if you’ve not been to Hong Kong, I feel like this design gives off a sense of nostalgia, or relation. There have been variations of Lego trains in the past, depicting European and American style trains, and I feel like this set would help strengthen the scale of diversity within this collection.
Disclaimers:
I have designed the set to be primarily aimed at the 18+ age range, although it can be constructed easily by any age. The entirety of the build consists of genuine Lego parts and elements, all designs are original and by me.
I also anticipate the wall, which is build primarily of 1x1 plates, could be replaced with panels to reduce the retail price
I also think stickers or printed elements would help add extra detail to this build