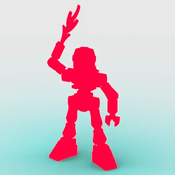 By Seuss
14 comments
I wanted to build a Bionicle set that was a proper buildable figure using for the most part only parts that I have seen in circulation on modern sets recently (with two exceptions that I will get into in a second). The goal was to make something similar to sets 76206 and 76155 but with a Bionicle feel to it. Takanuva is one of the most iconic and recognizable Bionicle characters, so it was an easy choice to make him the subject of this set. I made certain choices such as the lack of exposed studs and the inclusion of the classic Bionicle hand piece for the hands as opposed to a more detailed hand with fingers because I wanted to make it feel more like a Bionicle set, despite the fact that it's using primarily system pieces. Things like ratchet joints were also avoided in favor of the good old ball and socket for the reason of making the set look as Bionicle as possible as well.
One thing that was important to me was cost. My goal is to provide LEGO fans who grew up with Bionicle a relatively affordable set that celebrates one of LEGO's greatest themes, with the affordability being especially important because a lot of kids who grew up with Bionicle are college aged like me and have some disposable income, but not a boatload of cash. As is the set is 224 pieces, which is less parts than both set 76206 and set 76155. My hope is for this set to be cheaper than those but the fact that this is an Ideas set as well as the inclusion of the staff blade piece and the pearl gold recolor of the Kanohi Avohkii may increase the price a bit, I cannot be sure. You probably could replace the blade piece with something else and brick build the Avohkii if necessary, but the set would not be nearly as iconic without the mask of light in its proper glory.
If you are a fan of Bionicle who likes this set and want to see Takanuva return to store shelves for the first time in over a decade, please consider supporting this set as well as sharing it with anyone else you know who might like it and also want to support it. 10,000 supporters is a long way to go, but I truly believe that it is doable, as long as people are made aware of the fact that this set exists.