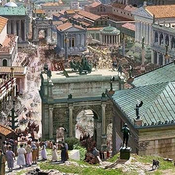 Until this day a substantial LEGO set involving the ancient Romans is missing. There where some Roman minifigures featered in the Minifigures series, but that doesn't really cut it looking at the attention the middle ages get. That is why I present the most iconic Roman building in existence: The Colosseum.

The set contains the arena how I envisioned it to be at the the time it was used, hereby inspirated by games, books and reconstruction pictures. The set contains exactly 3000 parts, including the cloth shaders at the top of the arena and the imperial lodge that have been photoshopped in. It was difficult finding a satisfying balance between detail and size to get a fitting representation within the 3000 piece limit.

For those who think that only half an arena doesn't suffice, it was built in such a way that 2 boxes together can form one complete building.

I hope you like it, and thank you for your support.