Castle on the Hill. A Tribute to Ed Sheeran and His Song 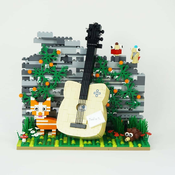 Castle on the hill

A tribute to Ed Sheeran and his song

Ed Sheeran has officially been named the world’s best-selling recording artist in 2017 by IFPI (International Federation of the Phonographic Industry)…..and who is surprised?

This potential Lego set is a tribute to Ed Sheeran and his great music. The set is based on his song ‘Castle on the hill’ as part of his album ‘Divide’ released in early 2017. It debuted at number 2 on the UK singles chart in January 2017 and sold 193.000 combined units in the first week…..Need I say more?

The song is based on Framlingham Castle, which is located in Framlingham, an east Suffolk market town in which Ed Sheeran spent a large part of his childhood.

My family and I are great fans of Ed Sheeran’s music, and we are also very local to Framlingham. We often visit the castle, go for walks in the town and use the sports facilities at Thomas Mills High School, where Ed Sheeran at a young age learned playing the guitar and started writing songs. On top of this, knowing that Ed Sheeran himself is a big Lego fan, made the decision to create a Lego set idea based on his song ‘Castle on the hill’ very easy…….:-)  So here we go:

The sets main component is Ed Sheeran’s guitar leaning against a bit of wall at Framlingham Castle. His ginger cat Dorito is sitting next to the wall guarding the guitar, whilst Ed presumably has gone down to town to grab a sandwich..? Two birds are sitting on the broken castle wall, and a hedgehog is shuffling around amongst the vegetation. The wall flowers are orange, as is Ed Sheeran’s favourite colour.

So just to sum it up: this potential Lego set, is not only fun to build, but would also make a great display model, as a tribute to a much loved and admired artist.

Thanks in advance for your support! :-)