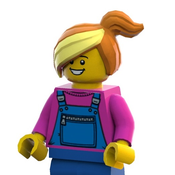 Postmaster General Moist von Lipwig is ready to take on Reacher Gilt and the Grand Trunk Semaphore Company in an exciting race to determine who can deliver a message to Genua faster. Miss Adora Belle Dearheart and the golem Mr. Pump cheer him on as Otto Chriek, the vampire iconographer for the Ankh-Morpork Times, captures the moment.

Lord Havelock Vetinari (Patrician of Ankh-Morpork), Archchancellor Mustrum Ridcully (head of Unseen University) and Reacher Gilt follow the race with the aid of the University's omniscope.

Watching on is Commander Sam Vimes, head of the Ankh-Morpork City Watch, along with officers Captain Carrot Ironfoundersson and Sergeant Angua von Überwald.

Inside the post office Stanley Howler, Head of Stamps, and Miss Iodine Maccalariat help customers at the counter. Postal Inspector Tolliver Groat can be found sorting through mail next to the now defunct mail sorting machine. Mr. Tiddles walks along an upper balcony on his daily routine through the post office.

On the post office roof if an old pigeon loft which has been converted into a clacks tower by the Smoking Gnu.

I have happily read and listened to Pratchett's books over and over again. I love the Discworld and would really like to have it included in the Lego universe. I hope you enjoy the set as much as I did making it. :)