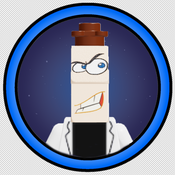 Help Perry the Platypus defeat the Evil Dr Heinz Doofenshmirtz!
There is plenty of fun to be had for kids and adults alike in this Doofenshmirtz Evil Inc. set based on the popular cartoon Phineas and Ferb. You can display the highly accurate model from the outside, or you can fold it out to reveal the interior and the many play features, compatible with this set's 7 minifigures; Dr Doofenshmirtz himself, Vanessa, Norm the robot, Perry the Platypus, Phineas, Ferb and Candace.
Work on Doofenshmirtz's removable hovercraft in the garage to prepare to fly it!
Tinker around in Doofenshmirtz's lab and try out the Chicken-Replace Inator.
Hang out with Vanessa and Norm in their rooms.
Chill in the living room and discover the surprise behind the fireplace!
Fire off Inators of your choice off the balcony including the Magnet-Inator and the feared Waffle-Inator!
Meet Phineas and Ferb as they step through the portal.
Make Doof and Perry duke it out and press *working* Self-Destruct Buttons.
Capture Perry the Platypus with the string operated trap!
Go on the balcony which has a launch feature and fire the Destruct-Inator Ray!
Along with the main build, this set has many accessories and Inators. Here are some you may recognise from the show;
-Doofenshmirtz's hovercraft
-Perry's hovercraft
-Magnet-Inator
-Waffle-Inator
-Do-Over Inator
-Destruct-Inator Ray
-Chicken-Replace Inator
-Ugly Inator
-Balloony
-Mary Mcguffin Doll
-4x Almond Brittle
-TV screen with AGLET concert
-Pizzazium Infinionite sign and element
-Candace's phone
-Evil Science 101 book
-Charlene Doofenshmirtz Picture
-Heinz Doofenshmirtz Picture
-Lawn Gnome
This set is perfect for anybody of any age, as it is riddled with play features and easter eggs, as well as being very good to display. I made this because Phineas and Ferb is one of my favourite shows and I hope that one day everyone can enjoy this set.
Heinz Doofenshmirtz Image: https://phineasandferb.fandom.com/wiki/Heinz_Doofenshmirtz
Charlene Doofenshmirtz Image: https://phineasandferb.fandom.com/wiki/Charlene_Doofenshmirtz