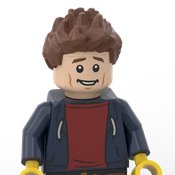 The Mountain Fortress
On top of a mountain rests a large fortress. Already from far away the blue-white banners show visitors the allegance of this mighty building: The famous Falcon Knights. Known in all the realms for their bravery, endurance and strength. Their name-giving sigil is a falcon of which a huge statue towers above the entrance. Entering the main tower over the drawbridge, visitors arrive in the central courtyard. In its center is an old tree providing some shadow for tired visitors.
Passing the tree you can enter the Great Hall featuring all banners of allied factions as well as an impressive fireplace made of white marble and a golden chandelier hanging from the ceiling. In front of the fireplace is the throne of the king of the Falcon Knights who either uses the Great Hall for audiences (when the furniture is removed) or for feasts with his knights and bannermen.
A latter leads to the king's and queen's quarters. These include appropriately a king-size bed, a small fireplace, the obligatory treasure chest and a desk where the king can write letters or oversee the map of his kingdom. As the queen loves flowers she has an exclusive balcony where she can tend to them and enjoy the view. It is right above the kitchen where the cook has all the tools and ingredients to put together a magical dinner. Speaking about magical...
Of course the wizard of the Falcon Knights has his own room right above the soldiers quarters in the large tower. There he stores all magical tomes, potions and equipement which he needs to work his magic. His balcony features a telescope to search the skies for dragons and other marvels. In case of a hostile dragon, the fortress can defend itself with a mighty ballista on its roof.
The idea is to provide the Falcon Knights with an iconic fortress that is both: displayable and playable combining the typical classic Lego Castle look with modern design.
The set features: