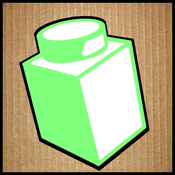 By The LEGO Press
28 comments

This Train has wings and can fly!!!  That can come in handy in many cases, for example if there's a cow on the tracks and its going too fast to stop it folds out the winglets, turns on the propellers, and takes off!  It's built to a western theme and i like the way it's wings are held together by wooden poles and the cross peaces. But my favorite thing about it would have to be the front white bit and the way I used the 1 by 2 cheese wedges to make it seem rounded.

It also has weaponry on the sides and top so it can blast away any obstacles in its way and can be used as a fighter jet for in case there's a war or somethings attacking it.

And while currently it has no power functions,  have made a coal carriage for it that has a battery pack in it and electric wheels and you can put the remote sensor in the train.

By The LEGO Press
28 comments