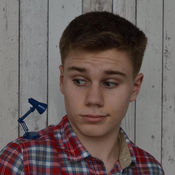 With the arrival of the reboot to the 1960's classic "Thunderbirds" there has been a spike of interest in merchandise around the Thunderbirds. The original toys are no longer available and the new merchandise for the 2015 reboot is not only selling fast, but aimed more towards a younger market. Although this seems understandable, there are still fans of an older age who enjoy the show due to its nostalgia and reminiscence of childhood, meaning they are looking for display items rather than toys per say.

My idea is a miniature "diorama" of the original Tracy island, however it could be easily updated to the reboot by swapping out Thunderbird 5 and the Tracy Villa. This model is set on a 16x16 baseplate and includes the illusion of a launching TB1, TB2 and TB3. Underneath the vegetation on the island there is a tunnel which inside houses the mole and a small underwater environment which displays thunderbird 4. All the thunderbirds are easily removable and pieces are included depending on whether you want to show or not show each of the 3 Thunderbirds Launching. This model is static and only includes hinges for elements such as the TB2 and TB1 launch, this means that it is made with mostly bricks rather than special pieces or plates which makes the model more robust and sturdy, the inside of the model is solid however it could be hollow to save weight or costs. The back of the island includes a rough rocky surface to imitate that of a mountain face. This mountain face is in 2 sections and can be removed easily by simply pulling them off. Studs are scattered around the island to give more texture and the uneven surfaces are accurate to a forest or mountain.