Secret of the Orbs 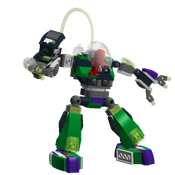 Secret of the Orbs is a rpg game created by my ROBLOX buddy, matblack7. After a few months in the making of this game which will be available for download soon, I thought, "Hmmm.. what if I make some LEGO sets that have to do with the game?" So, this would be my idea of sets that would be in the game.

NOTE: The look of the sets are not announced yet. I just tried my best to create the scene itself.

"Secret of the Orbs: The Movie" will be on my YouTube channel, which is 1tjmac12, so hold tight!!