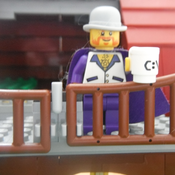 Say hello to the Asteroid Annihilator!

This mech is the big brother of Hazmat Havoc, and was built to deal with difficult space debris!

Help Sally and Martin feed the rocks to the meteorite muncher monster to keep the spaceways open for passing ships!

As with all my other mechs in this series it is aimed towards a vague environmental lesson,

Don't forget to vote for this if you want to have one!