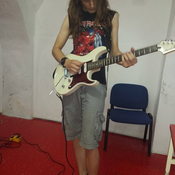 Flash is DC`s superhero who can run very fast. One of his enemies is Zoom who has the same ability. This set shows one of the battles between the Flash and Zoom. I do not know if you can see it, but Flash and Zoom have lightning on their back. I put it there so it would look like they are running so fast that lightning comes out of them. I hope you like that idea. In the set you also get three police vehicles. One police car, one police motorcycle and one swat team armored vehicle. There are two garbage cans behind which someone can hide. So to sum it all up in this set you get: three police vehicles, two garbage cans, Flash, Zoom and six police officers. Hope you like the set.