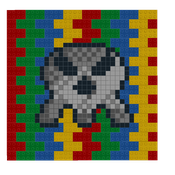 The Raft includes a Catapult, a Sail, and a Box of ammo

Fortress Includes 2 Cannons, a dismountable wall, a Jail, and a Crane with Treasure Chest