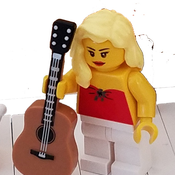 This magician is ready to do tricks and create magic illusions for an audience to be entertained. The set is made of a stage with a mosaic backdrop and flowing red curtains. The blue base is not included. The magician has a magic wand/stick, a hat and a cape. His lovely red-haired assistant comes in a few pieces but he puts her back together in the end. She even has ruby red high heels. Included are several magic tricks including three playing cards, 3 magician's cups with a red ball, 2 coins, and a rabbit. The other illusion he can perform is being handcuffed and submerged and frozen in ice in a glass ball and being able to break free. The glass sphere with chunks of ice and handcuffs are included.

I made this set for those who love magic, illusions, magic tricks, magicians, and performances.

This set is so exciting and magical that it would make a great lego product. There are multiple tricks including card tricks, cups, coins, and a rabbit. There are two illusions included, two of the most amazing ever attempted. It's fun to create the illusion of cutting the lego assistant in half and have her magically come back together. And of course the ruby red high heels make it more fun. Awesome set for all ages and genders.