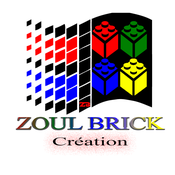 Hello dear LEGO fan
Thank you for your visit!

This is my first creation with LEGO Digital Designer.
In the family we love trains and the theme construction. It seems logical to have tried to merge the two.
So I focused on this project presented in the hope that it pleases.

First of all, I am sorry but by restriction of the software:
- I miss pieces 4524365 which is not in the library replaced by something close (x6).
- It is impossible to adapt the trains in the curves (for the overview) so I apologize for not being able to propose the really finished project.

--- The description ---
Here are the railway network agents that allow you to have fun.
A disaster has just arrived on the lego city rail network! No problem, you will be able to rescue the derailed train thanks to the crane.
A catenary has broken down, or a rail has just broken! The city of Lego is on the alert because thousands of people will be late.
Do not panic, you are part of the railway intervention unit. In no time, you move on the spot to repair the broken rail or catenary and replace it.
Your convoy is here to develop the railway network, enlarge it while building catenaries at the same time.
Once on the site, you have the necessary equipment to solve the problem with this very complete convoy.
Lego City is relieved to ask you to intervene effectively on the problems of the railway networks.

This scene is composed of:
- A BNFS motorized train by remote control
- A tray for rails
- A platform with a complete crane to install the rails or catenary posts with the aerial lift, which can rotate 360 ​​°. There are 4 stabilizing calles to prevent the crane from capsizing. A quick system to raise or lower the hook has been provided. There are also two dampers to support the closed crane on the board. And finally, the crane has a fastening system to keep it fixed to roll.
- There is a tray to store the catenaries and their accessories with a forklift so you can work on them to repair them or install them. A Ladder has been added as an accessory to help the outside of the railway line.
- 7 straight rails
- 16 curved rails
- 2 chains 16 M and the hook for the crane
- 7 simple catenaries mounted + 3 to ride playing with the yard (10 in all). The 10 can be arranged in the entire circuit. The 3 catenaries disassembled can be put in the tray provided for this purpose.
- A red sign that is the limit of maneuver of the driver not to derail during the maneuver because the way is not finished at the back. The woman with the talkiewalkie is there to take care of it.
- 6 characters
- The driver (burgundy cap)
- The crane operator (blue helmet)
- The welder, catenary installer (with a spare red helmet to play and help elsewhere on the construction site)
- A woman to advise in the radio the driver or the sono phone the crane operator or help the signalman
- The worker to seal the rails once laid with that big thermal screwdriver.
- A signaling agent to guide the crane operator with these two luminous battens.
- There are accessories to complete the site like the wheelbarrow, the shovel, the 4 tools on the forklift (screwdriver, hammer, key, key English), the electric screwdriver on the ground to fix the catenaries, a ladder, a crowbar for rail laying.
- There are also 2 red refills for the soldering station on the catenary shelf.
This project totals a total of 1324 pieces.

--- Support ---
If you like this idea, please press the support button on the right.
If you do not have an account, it is very easy and quick to create one. It's free and it also gives you the opportunity to support other good ideas from other manufacturers.
With your help, the votes can make this lego official.

Do not hesitate to talk to yourself (by any social media) so that your knowledge can also vote.

A big thank you for your time and attention
Truly