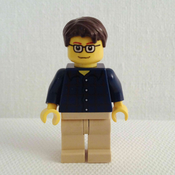 Join the rescue with the Coast Guard Search & Rescue Helicopter set, featuring an awesome helicopter with lights that really work!

This helicopter is packed with cool features!

This helicopter has an 8-stud wide body and 3-stud wide tail section. The design includes the following elements:

In addition to the helicopter and 4 crew member minifigures, the set includes a boater minifigure, a small boat, and a display stand.

I think that installing the lights adds a fun and unique aspect to the building experience. And the lights add a lot to the play value! If you think this idea would make a great LEGO set, please vote! Happy LEGO building!