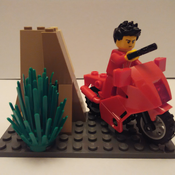 Project Voltes Five (Voltes V) was inspired by the Japanese anime TV series called Chodenji Machine Voltes V.  In the Philippines, where I come from, this was released as Voltes V (V as the Roman numeral for 5).  The series was animated by Sunrise and produced by Toei Company in 1977 and was aired up to the early 80's.

Voltes V is the super robot that is earth's last line of defense against the invading Bozanian empire. Piloted by the specially trained Voltes Team, Voltes V goes up against a new Beast Fighter in each new episode.  In order to defeat the enemies, the Voltes Team has to learn how to use Voltes V's robust array of weapons, as well as learn new skills each time.

The Voltes Team is composed of the following:

I would like to propose that the LEGO Company considers to release Voltes V, as one big set, together with the mini-figures.  I specifically made this model to fit mini-figures as I wanted to maximise playability.  The only challenge is that this will be a very big set, but well worth the investment.

For avid fans like me, I would most likely have 2 sets, one to display as the full robot and one as the individual ships.  I have also introduced my 3 sons (11, 9 and 5) to this and they love the idea.  I told them that Voltes V is the grandfather of the MegaZords that they are familiar with today.

I sincerely hope that this can be considered for production.