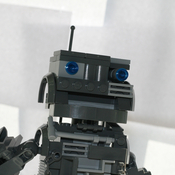 For a long time, I have always imagined that a robot would look sort of like random pieces of junk. So unless you were a genius and a billionaire, you would probably get your parts from the junkyard or a scrap heap. So I came up with Scrap. Almost no two sides of him are symmetrical, and he also comes with a large range of pieces. His arms are connected with ball and socket joints, and his elbows move with two hinge plates that allow them to move from 90 to about 180 degrees. His wrists can move 360 degrees, and his ankles also have a very wide range of motion. His knees do not move though, since they are technic axel connecters, and even those are not the same length. As you can see, Scrap comes with many pieces that may otherwise may be hard to find. So he would be great for piece collectors or for display proposes. Although he may not be the best to use in stop motion animations, he is very playable.

The minifigure that comes with him, is a little girl I named Emily. I would say that she's about 10 to 11 years old, and the creator of Scrap. I decided to put her there because I thought it would make sense to have Scrap's creator with him.

Please leave any comments or suggestions, and thank you for your support!